Approaching the end of a Parkrun on York Knavesmire

I ran my 49th Parkrun this week. Before I reach the milestone 50th I’ll reflect on how I reached this point.

Two hundred and forty five Parkrun kilometres ago (153 miles) I was a ‘first timer’ having just completed a ‘Couch to 5k’ programme because I had never run for fitness before. I’d cycled but running engages another set of muscles and techniques and I didn’t want to damage my ageing limbs.

I registered on the Parkrun website, printed my unique barcode and stood with the crowd of runners at the start line on the Knavesmire in York.

The first surprise was the range of people standing with me. They were not all athletes in the Olympic Games sense. But they were all up for the challenge. A great briefing from the run director preceded the starting countdown. Those reaching milestones were congratulated; first timers welcomed; ‘tourists’ shouted out their home run; applause for everyone; countdown and we were off. That was in October 2016. In reality it’s not a race. The only person I run against is myself. Can I beat my PB (personal best time). It’s some encouragement that on the first week everyone gets a PB –  incentive to return next week to beat it.

I’d completed a few 5k runs before joining the York Parkrun so I was confident of reaching ‘The Funnel’ in reasonable shape. As you cross the finish line the timer clicks the watch. “Stay in order” calls a marshal as we are lined up in the funnel. Staying in order is vital to preserve your finishing position until you reach the first volunteer handing out the position tags with a barcode and a number; your finishing position. Mine was 392 (out of 496). Next another volunteer scans your position tag and your unique barcode. Later a bit of computer number crunching matches your position with the stopwatch click and spews out your result.  It’s sent to me by email and text. My first Parkrun result – 30 minutes and 47 seconds. Since then I’ve knocked off over 4½ minutes. My PB now is 26:07.

It has to be said that York Knavesmire is a route to which many Parkrunners flock to set a PB. It’s flat, has a good surface with no odd bends or obstacles. I have run other Parkruns where the paths are narrow leading to congestion; sharp bends slow you down; hills, mud, puddles, underpasses, narrow bridges, tree roots – all kinds of handicaps for the determined PB setter.

But the pursuit of a good time is really secondary to the main benefit of running. Fitness. I’ve lost weight, strengthened my heart, improved my lung capacity and visibly toned my leg muscles. Running has driven me to discover exercises and stretches to warm up and warm down to avoid injury and to generally make sure the rest of my body keeps up with my legs! The sense of wellbeing after a run is worth all the effort.

All this has prepared me to be more adventurous. 10k runs, 10 mile runs and the odd half marathon. This September I will run the Great North Run for the second time. Half a marathon (13.1 miles) on roads from Newcastle to South Shields in a crowd of 57,000 other runners. I’m running for Shelter. You can sponsor me here.

Lots of people ask when I’ll run a marathon. I won’t. I’m 70 next year and I’d like to keep running for many years yet. I think a marathon takes its toll on any body – and mine probably hasn’t many tolls left to take. So I’ll stick to 13 miles as my limit. Having said that there are half marathons and half marathons. In October I’m going to the Lake District to run the Langdale Half. That’s likely to be tougher than a run in the park. But it’s where I was born – returning after 69 years to run the roads my father knew so well seems like a challenge I can’t refuse even if some of the inclines are 25%.

On Saturday 1st Sept 2018 I run my 50th Parkrun. Will it be a PB? I’ll run it at York’s Knavesmire to be in with a fighting chance.

(49er was the nickname given to speculators who flocked to California in 1849 for the Goldrush. It generally became slang for any miner and an American Football team in San Francisco the city founded as a result of the goldrush)

If you follow me on any of the social networks you will know that I regularly undertake running and cycling challenges to raise funds to help homeless people.

I am running another fundraising half marathon on the 9th of September when, along with my brother Mark, I will run the Great North Run. For this run we are looking for sponsors for Shelter. I make no excuse for asking you to donate again because as long as there are people without a home there’s a need to raise funds. I know many of my friends, contacts and former work colleagues gave generously when I ran the Great North Run last year. I’m asking again because there are still people homeless. Shelter’s tag line, printed on the back of my running shirt, says “Until there’s a home for everyone” and the last time I looked not everyone yet has a home.

But I don’t just run. Eight years ago I was one of the founders of a charity in York called Restore. It houses people who, without support, would inevitably be homeless. Today I am that charity’s chairman. We employ 6 staff, run 8 houses and provide supported accommodation for up to 30 people.

Three years ago I became the chair of the York Homeless Forum. Hosted by the City of York Council it brings together a wide range of providers in the city; statutory, independent, voluntary and charity providers. This group helped produce the city’s five year strategy for preventing homelessness. You can read it here, including my forward

I am now supporting the formation of a team of volunteers to staff a new overnight service for people sleeping rough on winter nights. It will provide a bed, showers and food on the coldest nights this winter.  YES Below Zero is a joint venture between churches, voluntary groups and the council.

So while I often run or cycle to raise funds for these projects and more, I’m directly involved in solving homelessness, not least for those who still remain with nowhere to live. Most of those people are hidden. For each of the people you may see sleeping rough around cities and towns there are many more, sofa surfing, in overcrowded and unfit houses and flats, in temporary hostels or even camping illegally on someone’s land.

So I unashamedly ask. Will you sponsor me and my brother as we run the Great North Run this September for Shelter – one of the national charities researching, campaigning and offering advice to end homelessness. Together we must fight the injustice of homelessness. In one of the richest countries in the world people have nowhere to call home. It’s not right is it. So please be generous –   donate here

I was running and listening to Bob Dylan on my headphones. “Like a Rolling Stone”. The run was  longer than usual, part of the build up to the Great North Run in September.

The words of the refrain alerted me to the pertinence of this song to my training. 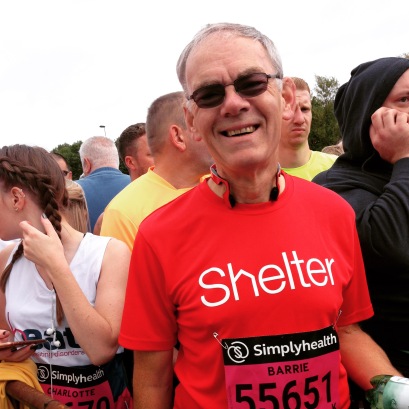 I am running the Great North Run for the charity Shelter. One of the leading charities campaigning to eliminate homelessness.

I don’t know how it feels to have no home, but I speak to many people who have experienced the raw edge of homelessness. I am chairman of a charity called Restore (York) which provides supported housing for people who are homeless.

Dylan’s words were penned in the 1960s – I was a teenager. Now, over 50 years later the problem of people being homeless is still with us. I don’t think homelessness figures were collected in the 60s to tell us how many people were without a home. Homeless people were ‘a complete unknown‘. Today we do count them but that doesn’t solve the problem. To be a number is hardly progress from being ‘a complete unknown‘ unless houses are built and affordable for the people who need a home. We are not building enough houses. We are still not providing enough care and support for people who are homeless. The numbers have increased year on year for the last 7 years. This is unacceptable.

Shelter has been offering advice, researching and campaigning on behalf of homeless people for almost as long as Dylan has been singing his song.

Subsequent refrains in the song use the line With no direction home. My sat nav has a HOME button which is programmed with my home address. One press and the route home is displayed on the screen with an estimate of the time I will arrive there. Homeless people have no address to preset that button. No direction home, like a rolling stone

I’ve been listening to this song since my youth – but it took a moment in time on a training run for the cry of the refrain to touch my heart. It’s just a small thing, but a helpful one, to donate to Shelter so that they can raise their game to end homelessness.

The shirt I am wearing for the Great North Run has the Shelter logo front and back with a tag line on the back until there’s a home for everyone. That’s why I’m running. Donate here