I’m weary of the continued and mindless negotiations for a BREXIT plan. They appear to be going nowhere. Our Prime Minister Teresa May has dug her heels in and is making no progress with the European Union, Parliament and even her own party. She has clearly lost the support of her back benchers and she seems to have lost the plot. Nothing magical will happen by simply repeating her monotonous mantra. Without imagination there will not be a miraculous change of mind either in Brussels or Westminster. Imagination is something Mrs May seems to lack.

So how do we proceed? May I humbly suggest.

Parliament takes back the process – snatching it out of the hands of the PM and the government. And then put the various options to the vote.

It may appear long winded but it won’t be as drawn out as the stalemate we have at the moment. It would deliver a result based on where we are now – a result is something the PM will never achieve. The parliamentary vote could happen immediately. A new people’s referendum would obviously take time to organise.

I commend my process to anyone who will listen.

May I also recommend regular listening to the BBC Brexitcast. The four contributors have opened the windows on this otherwise stifling process. Thank you Laura Kuenssberg, Katya Adler, Adam Fleming and Chris Mason for your wit and insight. No imagination lacking there.

I’ve had time to think about this one – since the vote on intorducing women bishops is now a couple of weeks behind us. I’ve read a load of articles, opinions and summaries of the events that led up to and followed the vote that by a very slim (some woud say undemocratic) margin threw out the measure that would have allowed the church to consecrate women as bishops.

The decision that it was alright in principle to have women bishops was made some time ago. This vote was about how to do it.

So here we are looking down a dark five year tunnel that may lead to the next vote. Five more years of women in the clergy ducking under the ‘stained glass ceiling’ as one newspaper columnist put it. Five years of the church appearing to be struck in a bygone age. Five years of negative headlines where those outside the church appear to know more about what we’re doing than we do.

These voices will distract and deter some people looking for their place in Christ’s kingdom. But if it hadn’t been this issue those voices would have found another one to put off the seekers from looking for the truth in Christianity.

Thankfully, the Church of England is not the only Christian denomination. Others have women in senior positions of leadership as do other parts of the Anglican communion. So it’s possible that another tradition would help those seekers to sign up to a local christian community.

For some though the long wait for the next round of debates and voting will be too long. They will never, in the duration of their working life, fully answer the calling they feel they have received. In the cold light of day there must be many callings that are never completely fulfilled, but in this case, to miss out because such a small number of people witheld their approval seems unjust. Rightly there were tears of disappointment at synod and probably some words of anger in private too.

So perhaps this would be a good time to call a moratorium on the appointment of any more bishops until this issue is resolved. The church has agonised for years over the number of diocese and bishops with their palaces, staff and retinue. Here is an opportunity to cut the numbers. Impose the same stained glass ceiling on all clergy until men and women can be treated equally. It may just focus a few minds in all three houses of Synod and who knows – speed things up a touch.

I’m having problems with this Police and Crime Commissioners election.Here in North Yorkshire it’s a 70 grand a year job – there’s no interview – no competencies or personality profiles are being checked – previous experience seems to be irrelevant – it’s just the popular vote that decides on the basis of what the candidates are saying about themselves.Normally politicians (councillors and MPs) only share power with any number of other politicians. The PCCs are essentially on their own. All the power of the office is vested in one person.So should I vote or abstain in the hope that low turn out will lead to a proper selection process in future.I have never abstained from voting before – but I am in a genuine dilemma. I think the process is deeply flawed.

This is a preview piece about VirginTVAnywhere. After reading this perhaps the app should be renamed VirginTiVoCompanion.

What is this app for and how will it improve my enjoyment of consuming Virgin Media TV using TiVo?

The ‘about’ and ‘help’ sections in the app are noticeably devoid of an over arching vision of its purpose. The help files are mainly about how the app functions technically – with little about why I may want to use those functions or how it’s better than using the standard remote control. I had to spend sometime with the app to discover what it would and wouldn’t do before I could think about how I might use it.

I asked myself three questions
Network required
My final comment is about connecting the TiVo to the router. Mine are in different rooms so I have attached a WiFi adaptor to the TiVo. Isn’t it time TiVo was fitted with an integral WiFi card – after all it would add little to the cost of the box and apps like TVAnywhere could connect without substantial extra cost to the customer.
Manage Expectations
I assume that when the app is launched it will be free. If so then Virgin Media has a lot to gain by good marketing. Without it, the title raises expectations above it’s function.
So what do I like about VirginTVAnywhere?
But I won’t be taking the batteries out of my TiVo remote just yet. For basic use it’s still quicker to pick it up to select a show or a channel.
I also think I may have found a bug.
#VirginTVAnywhere
@barstep

In an article in this week’s New Statesman, Mark Thompson says that merging or closing local radio stations is not the way forward for the BBC ……We’re in the middle of an open debate inside the BBC about its future. One idea was whether you could merge local radio with Radio 5 Live or reduce local radio in some way. Although local radio is relatively cheap to run, when you run 40 radio stations in England, you have to multiply the cost. The point of local radio is that if it’s not local, it’s not doing its job. It’s reasonable for people to have a debate about merging or shutting local radio but that’s not the way forward for the BBC. 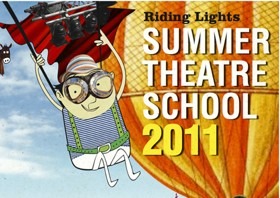 b) It’s not too late to apply

I’ve been planning, with Bridgett Forman, for the workshops that we’ll be running through the week of the summer school, which this year is at Queen Margaret’s School in Escrick near York.

Tall Stories is brand new this year. It will combine digital storytelling with stage production to put on a show that combines multimedia production and performance. It looking very exciting and innovative.